Nayanthara, a South Indian actress, and director Vignesh Shivan married today. The wedding took place at a luxurious resort in Mahabalipuram. It was a star-studded affair, with some of Hollywood’s biggest names in attendance. Among those in attendance were Rajinikanth, Shah Rukh Khan, Mani Ratnam, Suriya, Vijay Sethupathi, and many others. The couple married in the morning, and the first photo of the newlyweds is now available. 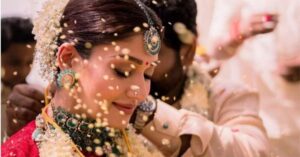 Vignesh Shivan took to Instagram to share a romantic photo from the wedding ceremony. In it, he is seen sitting next to Nayanthara and planting a kiss on her brow. Nayanthara looks stunning in a red gown, while Shivan is dressed in a pale kurta. Flowers adorn both of them.

Vignesh posted the photo with the caption, “On a scale of ten…

She’s Nayan, and I’m the One/ With God’s grace, the universe, and all of our parents’ and best friends’ blessings/ Just married #Nayanthara”

The wedding of Nayanthara and Vignesh Shivan was reportedly a lavish affair attended by the who’s who of the Indian film industry. While most details of the wedding were kept under wraps, celebrities were seen entering the venue. According to multiple reports, Rajinikanth presented the mangalsutra to the groom.
Nayanthara and Vignesh Shivan had been dating for more than six years before the director proposed marriage. On June 9, the couple married.