Ishaan Khatter Break up After 3 Years of Relationship

Ananya Panday and Ishaan Khatter, who have been in a relationship for more than three years, have parted ways. There are reports that suggest Ananya and Ishaan are not together now. As mentioned in Pinkvilla, Ananya Panday and Ishaan Khatter have called it quits. The source revealed the portal, “The two bonded well on the sets of Khaali Peeli and that led to the beginning of a new journey. However, after living their lives together for 3 years, they have decided to finally end their relationship. It has been a mutual call and the things have ended on a positive note. The two will continue to be cordial going forward”. 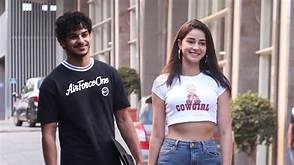 The source insists that the two might even do a film together if an offer comes their way and are handling the breakup with maturity. “It’s all fine for them on the friendship front, and they have parted ways on a good note. They realised that their way of looking at things was a little different from each other and hence the decision,” the source concluded.
It was just a month ago, Ananya was spotted with Ishaan at Shahid Kapoor’s 41st birthday. They all bonded so well and had even shared several inside pictures from the bash on Instagram and captioned them, “#besttimes”.

Talking about Ananya’s work front, she was last seen in the OTT release film Ghehraiyaan. For a long time now, she has been in discussion with South Superstar Vijay Deverakonda regarding the film Liger. After this she will also be seen in Kho Khye Gum Kahan. On the other hand, Ishaan will be seen in Phone Bhoot with Katrina Kaif and Siddhant Chaturvedi. He will also be seen in Pippa where he will play the role of Brigadier Balram Singh Mehta.