An artist born but once in centuries: Tributes pour in after Lata Mangeshkar’s death 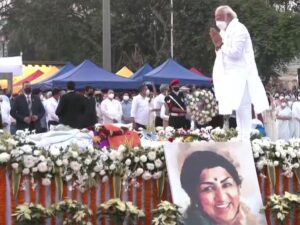 “The end of an era”, “an artist born but once in centuries” and “a void that cannot be fulfilled”, is how prominent personalities, led by President Ram Nath Kovind and PM Narendra Modi, mourned the passing away of singing icon Lata Mangeshkar on Sunday.
The 92-year-old singer had tested positive for Covid with mild symptoms and was admitted on January 8 to Breach Candy Hospital’s intensive care unit (ICU) where she was being treated by Dr Pratit Samdani and his team of doctors.
Mangeshkar’s condition had improved in January and she was taken off the ventilator but her health deteriorated on Saturday. She died on Sunday morning due to multiple organ failure.
The President and the Prime Minister led the tributes for Mangeshkar who spent close to a month in the hospital before her demise. 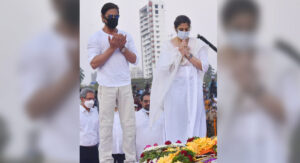 “Lata-ji’s demise is heart-breaking for me, as it is for millions the world over. In her vast range of songs, rendering the essence and beauty of India, generations found expression of their inner-most emotions. A Bharat Ratna, Lata-ji’s accomplishments will remain incomparable,” President Kovind wrote on Twitter along with a photo with the veteran playback singer. 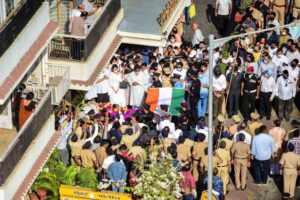 “An artist born but once in centuries, Lata-didi was an exceptional human being, full of warmth, as I found whenever I met her… My condolences to her family and admirers everywhere,” he said in another post.
PM Modi also shared a photo with Mangeshkar and said the legendary singer’s demise leaves “a void that can’t be filled”. 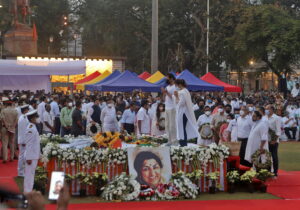 “I am anguished beyond words. The kind and caring Lata Didi has left us. She leaves a void in our nation that cannot be filled.The coming generations will remember her as a stalwart of Indian culture, whose melodious voice had an unparalleled ability to mesmerise people,” he wrote.
“Lata Didi’s songs brought out a variety of emotions. She closely witnessed the transitions of the Indian film world for decades. Beyond films, she was always passionate about India’s growth. She always wanted to see a strong and developed India.”
Vice President Venkaiah Naidu also tweeted his condolences, saying that he is “extremely saddened” by Mangeshkar’s death. “India has lost its voice in the death of Lata ji, who has enthralled music lovers in India & across the globe with her mellifluous & sublime voice for many decades,” he added.
Union Minister Nitin Gadkari, who visited south Mumbai’s Breach Candy Hospital earlier in the morning, said that Mangeshkar was “the pride of our nation”.
“She took the country to greater heights, all over the world with her singing. Her voice was magical. Her loss is humungous, it’s a void for all of us. I visited the hospital and had her darshan. It’s the end of an era,” Gadkari told reporters.
From the film industry, actors Dharmendra, Amitabh Bachchan, Shabana Azmi, Salman Khan, Madhuri Dixit Nene, Akshay Kumar, Ajay Devgn and filmmaker Hansal Mehta paid tributes to the singer.
“The whole world is sad, Can’t believe you have left us !!! We will miss you lata ji pray for your soul be in peace,” wrote Dharmendra on twitter.
Bachchan paid tributes to Mangeshkar, whom he described as “The voice of a million centuries”.
“… her voice resounds now in the Heavens! Prayers for calm and peace,” he wrote on his blog.
Lalit Pandit of the composer duo Jatin-Lalit, who worked with the singer on films like “Dilwale Dulhania Le Jayenge” and “Mohabattein”, said she had a “fantastic sense of humour” and would always remember things.
“Her memory was vivid. If she met you, she’d remember you, if you shared something with her, there’s no way she’s forgetting it,” he told PTI.
“She was a jewel. There was no other Lata Mangeshkar, there is none and there won’t be any. I will celebrate her life, today and always,” he added.