Further to the report of the tragic death of four people, including an infant, whose bodies were recovered near the Canada-US border in Manitoba on 19 January 2022, Canadian authorities have confirmed the identities of the four deceased as; (i) Jagdish Baldevbhai Patel, male, 39 yrs (ii) VaishalibenJagdishkumar Patel, female, 37 yrs (iii) VihangiJagdishkumar Patel, female, 11 yrs. and (iv) DharmikJagdishkumar Patel, male, 3 yrs. All the four were Indian nationals. The next of kin of the deceased have been informed. The Consulate General of India in Toronto is in touch with the family of the deceased and is providing all consular support. The High Commission offers its sincere condolences to the family and friends of the victims. 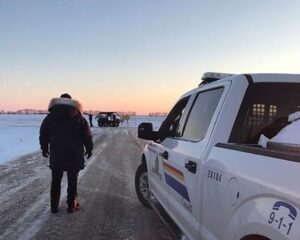 Canadian authorities have also, after medical examination, informed that based on the circumstances, the death of all the persons have been determined to be consistent with exposure to the outdoor elements. The High Commission of India in Ottawa and our Consulate in Toronto continue to work closely with Canadian authorities on all aspects of the investigation into this incident. A special team, led by a senior consular officer from the Consulate General of India in Toronto, is camping in Manitoba to assist ongoing investigations by Canadian agencies and to render any consular services for the victims.

People-to-people relations are an important pillar of India-Canada bilateral relations. Canada is a preferred destination for Indian immigrants and students. India and Canada work together to ensure the safety and well-being of all Indian immigrants into Canada. The two countries have a regular consular dialogue which takes up issues related to migration and welfare of citizens in each other’s territories.

On longer term issues that this tragedy has brought into focus the need to ensure that migration and mobility are made safe and legal and that such tragedies do not recur. A number of ideas remain under discussion between India and Canada. For instance, to prevent and suppress irregular migration, smuggling of migrants and trafficking in human being and to facilitate sustainable and circular mobility, India has proposed a comprehensive Migration and Mobility Partnership Agreement (MMPA) to Canada, which remains under the consideration of the Canadian government.