Shah Rukh Khan to start shooting for Rajkumar Hirani’s film on April 15; To juggle dates with Atlee’s next

Superstar Shah Rukh Khan is back in the game with his most talked-about film ‘Pathaan’. Apart from that, he has signed two other films which are yet to be announced. Reportedly, one of them is Rajkumar Hirani’s untitled next. The latest report suggests that SRK is all set to start shooting for his film on April 15.

The film is a social comedy set against the backdrop of immigration. It is being said that a huge set resembling Punjab is erected in Mumbai’s Filmcity and the team will be shooting there for almost 40 days. 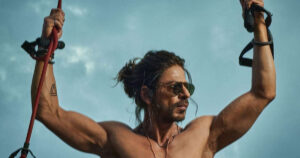 According to Pinkvilla, the film will also feature Taapsee Pannu and Boman Irani in key roles. While Vicky Kaushal, who has worked with Hirani in ‘Sanju’, will be seen making an extended appearance in the film. The report suggests that Hirani will complete the 40-day schedule and then take some time off to edit it before starting the next schedule. In the meantime, SRK will shoot for Atlee’s next which is set in Mumbai and Pune. Post that, SRK will return to Hirani’s film and head to London, Budapest and either the US or Canada for the next schedule. The overseas schedule is expected to start in July.

Meanwhile, Shah Rukh recently treated his fans with the first look of ‘Pathaan’. He was seen showing off his toned body and washboard abs. He recently returned from Spain after wrapping up the shoot of ‘Pathaan’ with Deepika Padukone. The film is slated to release next year in January.