Kiran Toor: Volunteering for the betterment of our youth

Kiran Toor: Volunteering for the betterment of our youth

Kiran Toor is a 24 year old community activist. She was born in Surrey, BC, and began her academic journey at Akal Academy Baru Sahib, an international boarding school located in Northern India. Kiran’s story begins with her nanima (maternal grandmother), who she was raised by while her parents remained in Canada working diligently towards building a better future for their family. Nanima, a single mother, raised Kiran’s mom and uncle independently without any support from extended family. She then raised Kiran with infinite and unconditional love, and with principles that Kiran believes have brought her to become who she is today. “Kade laambha nai auna chahida, ki naani ne kuch nai sikhaya” (Never let anyone point a finger that your nanima didn’t teach you anything). These words to her by her grandmother are some of the most powerful words to her. She was always worried that she may fail in providing the love only a mother can, but Kiran truly believes her nanima raised her without her ever thinking about not having her mother around. She remembers her childhood as a beautiful one. Her uncles and aunts raised her with so much love and care.

“I sometimes wonder if my parents had not sent me to India, would I ever have had the same relationship I have with my family back in India? Would I have ever received that much love and support from anywhere else?” 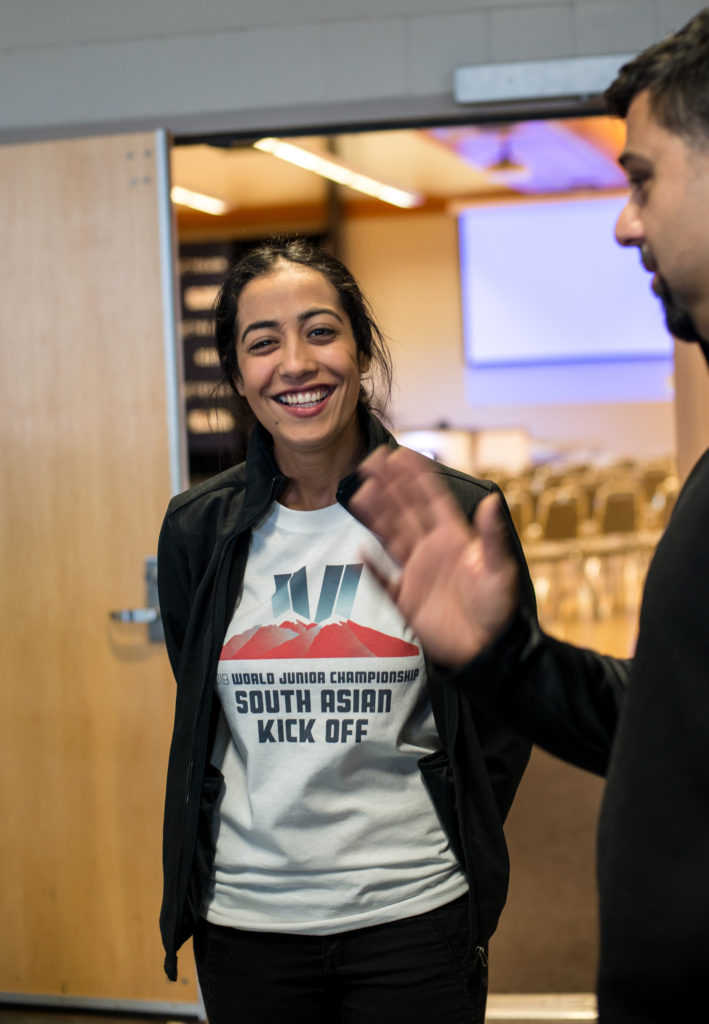 During her time in Baru Sahib, Kiran was instilled with principles of seva. Through value based and spiritual education, she was exposed to an abundance of opportunities. Living in a hostel, amongst peers from all across the globe, Kiran feels Akal Academy was (and continues to be) a safe haven for her, a home away from home that kept her sheltered and away from harsh realities of the world. It was truly an unforgettable experience and contributed heavily in laying the foundation of Kiran’s community service work. “My mom was actually the first principal at Akal Academy Baru Sahib when it was just a small school founded in 1986, so everything came to feel full circle. It was important to her to have her children to go back to the holy land at the school which now had grown exponentially and had students from around the world attending to attain value based education.”

Kiran’s most beautiful memory is of her Babaji – Baba Iqbal Singh Ji, founder of Baru Sahib. Babaji, a retired agricultural director from the state of India, Himachal Pradesh, showered Kiran and her peers with infinite love, blessings, and guidance. Although he could have chosen to live an easy and comfortable life post retirement from what is considered one of the most prestigious positions with the state, Babaji instead chose the path to devote his life to providing value based and spiritual education to people around the world. He took the unconventional path which resulted in hundreds of thousands of people around the world, leading meaningful lives with an awareness and ambition to serve humanity. Kiran is only one product and example of his contributions to the world. “If an elderly man who cannot even walk without support can go around the world to preach and serve, we young people can do wonders with the energy and resources we have. We can change the world. Together, we can end hate.” – says Kiran as she describes the impact Baba Iqbal Singh Ji has had on her life. 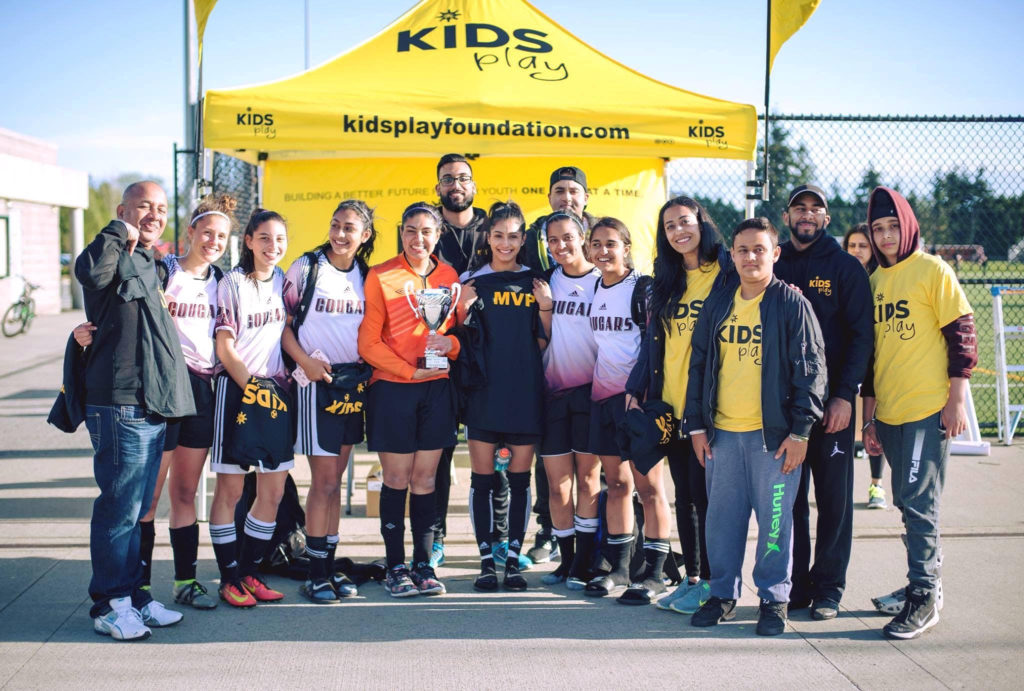 Today, Baru Sahib is home to multiple colleges, universities, IB affiliated schools, as well as a charitable hospital. Additionally, countless schools and addiction centres have been set up in villages across North India to provide low skilled women with job opportunities and their children a value based education. “When I attended meetings for Kids Play, I happened to go to Isle of Mann, a large scale development company, where I saw photos of the charitable hospital at Baru Sahib. I recognized the photos right away! When I asked about it, I was told that there is a charity called Mankind which took doctors over to the hospital to perform free surgeries on people who couldn’t afford them. I can never forget the sense of pride I felt that day”.

While Kiran and her two siblings were soaking in Nanima’s love and Babaji’s principles, in Canada life came to a sudden halt for her parents after her dad met with a harsh motor vehicle accident. “Some of the darkest days fell upon the family. Dad’s injuries were deeper than just physical, his mental health took a hit too, and that’s when mom had to take on the role of the household provider”, says Kiran. At the time, Kiran’s mom worked as a receptionist at Basant Motors, but with hard work and perseverance has worked her way up to Finance Manager today. “To us, she is a super mom,” says Kiran proudly.

Then came time for Kiran to return to Canada, and she began to seek the same comfort that Baru Sahib had provided her with. She looked for a place to belong in, at times even feeling lost as she tried and failed to find that same sense of purpose. Kiran was then given the opportunity to volunteer at Akal Academy Surrey, which is a local branch of Baru Sahib. Here, she immediately connected with Gurjit Gill, a beautiful soul who also attended Baru Sahib for a better part of her life. “My nanima, mom and Gurjit aunty truly inspire me to face all adversities with courage. They are the epitome of strength and resilience”.

Then, like a light at the end of the tunnel, came about the most reviving chapter of Kiran’s life, where she met someone who guided, mentored and supported her like the older brother she never had. A light of hope for those wandering without a purpose, a son to mothers who cannot cope with the fact their child has succumbed to the wrong crowd, a brother to many like Kiran who just need an opportunity, a platform, a little push to realize their potential. His name is Kalwinder (Kal) Dosanjh, the founder of Kids Play Foundation, a non-profit organization that has been providing free programs to the community since 2015. 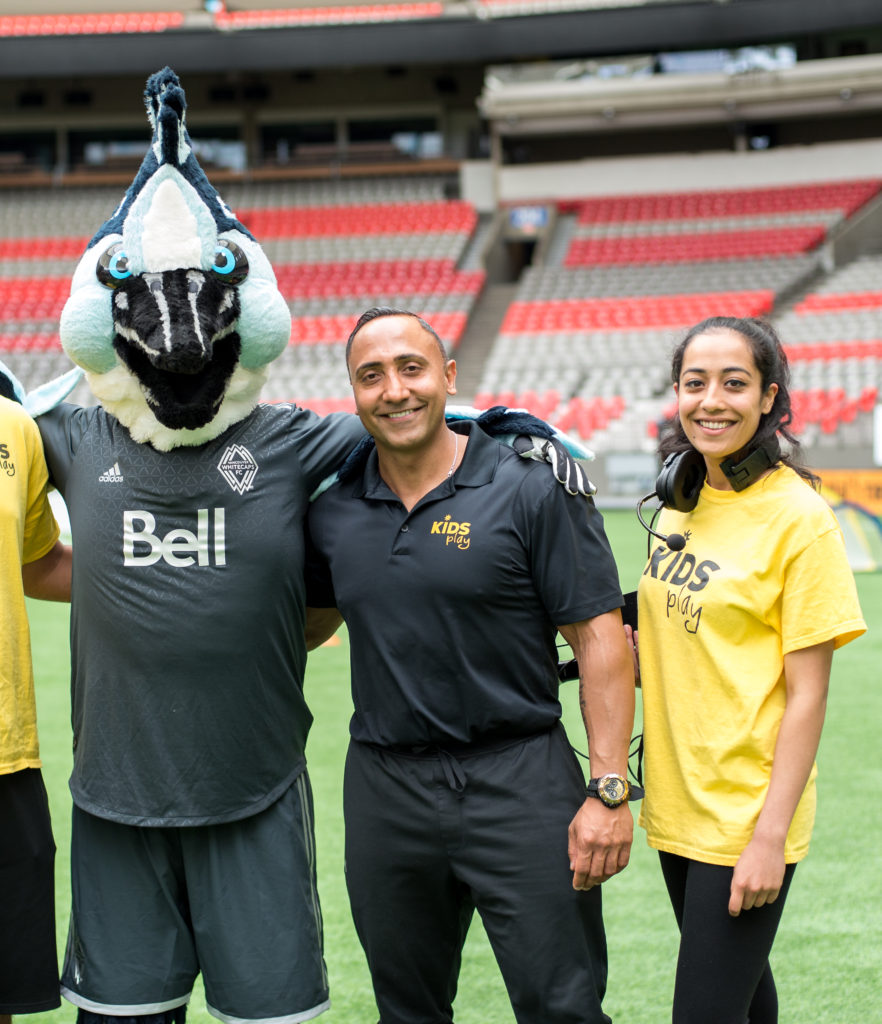 A believer of being proactive rather than reactive, Kal founded Kids Play to provide young people with an alternative positive outlet, to help them divert away from a life of drugs, gangs, and violence.

Thus far, with over 500 volunteer members, spearheading over 80 projects and 180 events, Kids Play has impacted over 50,000 youth through their 100% free programs since its inception. The bedrock and fundamental principle of these Kids Play Foundation programs is to establish a rapport with the youth through the medium of sports. Organized sports are being used throughout the world as a dynamic mechanism to engage youth of all races, genders, and classes. Through the initiative of providing the youth with an opportunity to play in organized sports tournaments, the foundation strives to bridge a gap between the youth and adults in a constructive manner. It is done through providing young people with a positive identity and feelings of empowerment, whilst developing sportsmanship, leadership, teamwork and self-governance skills.

Kiran, who is the Vice President and has been described as the backbone and driving force of the organization, oversees all programs alongside Kal and the team. She laughs when she’s asked about skill sets she has attained as the VP of the organization, “Kids Play Foundation has given me skills to be able to wear many different hats that of an event organizer, manager, media outreach, even an accountant! I think all of us at Kids Play can relate to that statement. It is amazing to see how much we have gained by taking this unconventional path.”

Kids Play’s ever-growing family includes, veteran law enforcement officer and Kids Play founder and CEO, Kal Dosanjh; Ambassador, Wally Oppal; the first ever Indian basketball player to play in the NBA, Satnam Singh; Indo-Canadian professional wrestler, Jinder Mahal; the Whitecaps; the BC Lions; the Vancouver Giants, Hockey Canada; as well as a team of decorated volunteers, all working tirelessly towards one common goal: the betterment of the youth.

“We’ve all been directly or indirectly affected by the havoc wreaked by youth gang violence, and if we can play a small role in deterring even one youth from going down the path of no return, we’ve succeeded. However, if we can engage our youth in creating a movement and ridding our community of the youth and gang violence epidemic at its root, well, we just saved an entire generation. In the face of adversity, it’s time to come together and claim back our community, our youth”, words of a Kids Play volunteer inspired and mentored by Kiran. 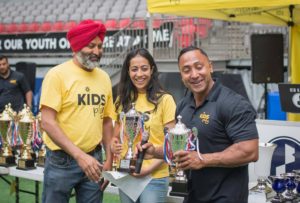 “Kal’s words to anyone who comes to us and appreciates the work we do are, ‘it is all her, she runs the entire organization’ and that is to me the biggest compliment. The person who provided a stepping stone to me and has been a guide every step of the way, chooses to give me all the credit. I cannot ever seem to find words to thank him for what he has done for me. I was lost. Now I see many young people who are going through tough times, it is only fair I pay it forward and share with them the support I have received.”

Kiran’s work has been recognized on multiple platforms and she continues to perform her duties towards her community with integrity.

A message to the community:

“If my parents had not supported me on this venture, I think of how that would have affected the paths I took in life. If any parent feels hesitant to let their child take an initiative of being out in the community, I can relate to that. My parents also wanted to make sure I was surrounded by the right people. For that to happen, you have to help your child and support them. My parents have always supported myself and my siblings to follow our dreams while also being mindful of making informed decisions. I would like everyone to know, if I can do it, so can you.”