Australia fires:  The crisis & The causes 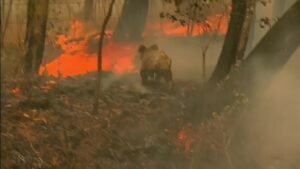 Record-breaking temperatures and months of severe drought have fuelled a series of massive bushfires across Australia.

Rain has brought some respite to the thousands of firefighters and volunteers tackling the blazes, which have been burning since September. The fires intensified over the past week, with a number towns evacuated.

At least 24 people have so far been killed – including three volunteer firefighters – and more than 6.3 million hectares (63,000 sq km or 15.6 million acres) of bush, forest and parks have been burned. 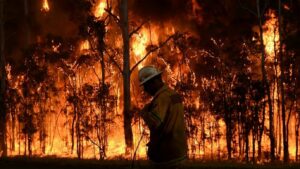 There are concerns that the entire species of plants and animals may have been wiped out by bushfires following estimations that 480 million animals may die as a result of the crisis.

The estimation includes animals killed in the fires, but also through loss of habitat.

Causes of the crisis

A climate phenomenon is causing the heatwave 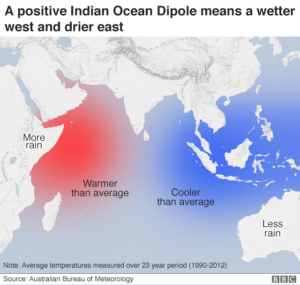 The main climate driver behind the heat has been a positive Indian Ocean Dipole (IOD) – an event where sea surface temperatures are warmer in the western half of the ocean, cooler in the east.

The difference between the two temperatures is currently the strongest in 60 years.

As a result, there has been higher-than-average rainfall and floods in eastern Africa and droughts in south-east Asia and Australia.
Andrew Watkins, head of long-range forecasts at the bureau, said the dipole was crucial to understanding the heatwave.

“The key culprit of our current and expected conditions is one

of the strongest positive Indian Ocean dipole events on record,” he says.

And meteorologists warn that, for the moment, the intense weather and elevated

fire risk in Australia is set to continue. 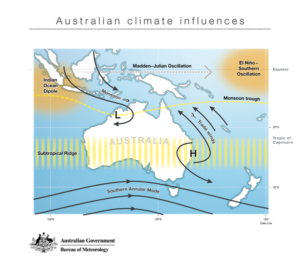