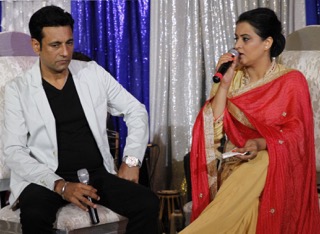 Raj Brar is a tall, handsome, Punjabi gentleman, who is an accomplished songwriter, singer, producer, director and the list continues to define him. However, the same person had sadly also come to be known for his alcoholic lifestyle. Last the people had seen of him was being on the stage of his movie premier where he seemed highly intoxicated and could not stay put in his chair. This short video clip where he is falling off his chair and the related news was aired on national TV programs, discussed in news all around in the world the Punjabi community and was posted on the YouTube.

During his successful 26 years in the Punjabi music and film industry he has conquered many horizons. To say the least, he has been accepted as THE trendsetter in the music industry. This time; however, he has taken the lead in a race where most if not all, do not even dare to take part in. He has decided to speak on the matter that is considered as shaming in India for a man to speak about as it is for a woman to talk about if she had been raped. Due to the social stigma attached to this, all people keep these details in their closet with their other skeletons.

On behalf of Our Global Village Charitable Foundation (OGV), I was honoured to hold an open dialogue with Raj amidst this very large and attentive gathering. Through his simple, honest and blunt remarks not only did he forewarned the attendees about the consequence of alcohol or drug addiction, but also inspired others to find strength within themselves to beat it. The event was held at Grand Taj hall, in Surrey, BC. Hall. The venue was packed to the last standing space to give their movie hero as well as the real life hero the support he needed and listen his experience of drugs and rehab.

He spoke at length about the days when he took his first drink to the days he could not part from it and kept a bottle under his bed sheets; three months long horrible experience at the rehabilitation center, his excessive drinking that continued after he left that center, financial and marital complexities that he faced during this time; the day he was so close to dying when his friends found him drowned in alcohol; and to the day he left the hospital that he later joined, fully recovered from his addiction.

Furthermore, he shared the shocking realities of a rehabilitation Centre in Bathinda, a well-known town in the state of Punjab, India, where he spent three long months. He witnessed and lived through an inhumane atmosphere that is unheard of in the outside word. He shared that patients were regularly beaten and hearing screams was the normal expected atmosphere of this facility. Fear, hunger, unclean surroundings and pain were the realities of all patients. Although he was spared from the extreme behaviours from the staff, it was still demoralizing for him to be living in such a humiliating state where all patients and staff knew of his celebrity status. The people who are running this facility are not professionally qualified.

Raj suggested that such rehab centers should have large playground, music and dance facilities, fresh air, clean surroundings, healthy nutrition and encouraging counsellors to help the patients integrate back to the society as positive contributors and role models.

Canadian Pressure Organization and Our Global Village Charitable Foundation, congratulate Raj Brar for his brave recovery. We thank him for speaking openly about his life experiences to this large crowd of concerned, sincere and supporting people of Surrey BC. As Our Global Village Charitable Foundation’s slogan says, “Together we can, together we will”, humanity shall continue until eternity.