Sandhu, a 21-year-old model, tops a field of some 80 contestants 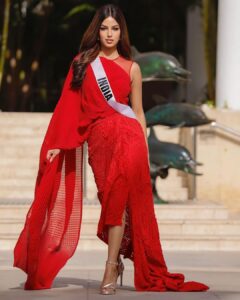 Sandhu, 21,beat out 79 other contestants from various countries and territories — including runner-up Miss Paraguay Nadia Ferreira and second runner-up Miss South Africa Lalela Mswane — to claim the prestigious title.Sandhu was presented the crown by her successor, Miss Universe 2020 Andrea Meza, before taking her first walk as the new Miss Universe on the stage in Eilat, Israel.A strong advocate for women’s empowerment, Sandhu is actor who draws inspiration from Priyanka Chopra. In her spare time, she enjoys yoga, dancing, cooking, horse riding and playing chess.

In a speech on stage during the pageant, Sandhu urged young people to “know that you are unique and that’s what makes you beautiful, stop comparing yourself to others.
“I believed in myself, and that’s why I’m standing here today,” she added, to loud applause from the audience.