Twelve-year-old Govind Saggu is Surrey’s rising star in Lacrosse. Govind is a natural athlete, he was two and half years old when put on his first pair of skates and was enrolled in swimming lessons by his parents and a year later he started soccer and taekwondo. Govind’s parents let him play and explore all the sports he liked.

At the age of 7 Govind’s father introduced him to the game of box lacrosse. Govind took to the sport like a fish takes to the water. Box lacrosse is played at the highest level in the National Lacrosse League and by the Senior A divisions of the Canadian Lacrosse Association. Govind is a talented and dedicated player and in Lacrosse too he has emerged as a strong player. He has been playing in the top rep teams every year. 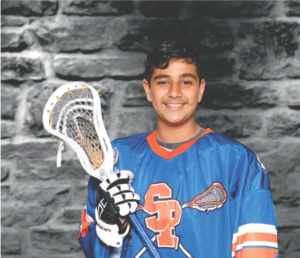 His greatest success came in 2016 when he was on the first year A1 Rep Bantom team and was selected to try out for the provincial lacrosse team called Team BC. He qualified for the junior National Lacrosse League in 2017. Intensive tryout and determination secured him a spot at the 2017 US National Box Lacrosse Championships in San Jose, California in July of 2017 and then further to the Canadian National Box Lacrosse Championships called the Toronto Rock in Toronto, Canada in August of 2017. Govind persevered through the pressure as one of the top goal scorers leading the way to a silver medal finish at the US nationals and a Bronze place finish at the Canadian Nationals. Most recently, Govind was recruited as a free agent for Team Ontario to play a tournament over the 2017 Christmas break. Govind’s previous Lacrosse coach Ryan Paddon says, “I have been coaching minor sports for over 20 years, and Govind is easily one of the most coach-able athletes I have interacted with. He is always attentive during practices and training sessions and is not afraid to ask for advice if he isn’t sure what to do in certain situations or feels his skills need improving. Because of this, Govind has developed into one of the go to players on our team. He was a huge part of helping our team qualify for the BC Provincial Championship Tournament in 2016. Apart from his skills on the lacrosse floor, Govind is also a very positive and compassionate teammate. Not only is he the first one there to congratulate his team mates on a job well done, he is also the first one there to support them when they are struggling. He never gets down on his team mates and is always there to pick them up when they are down or offer support when they make a mistake.”

Apart from sports, Govind’s first priority is school and he is a dedicated and conscientious student who excels in academics. Looking forward into the future, Govind’s main aspiration in life is to achieve a sports scholarship to College or University and focus on following his parent’s footsteps and becoming a professional in his chosen career path. Govind’s father was a Junior A hockey player, provincial soccer player, and a provincial wrestling champion while his mother, Dr. Ramen Saggu was a high level figure skater under Skate Canada with the Sungod Skating Club in Delta and the Simon Fraser University Varsity Figure Skating Club.